I recently took a Master Photography class with Martha Rial at Chautauqua Institution. The class was an inspiring motivation which concentrated on a photojournalism approach to telling a story. I did my assignment with the resident Chautauqua Summer Ballet, which is the Charlotte Ballet. 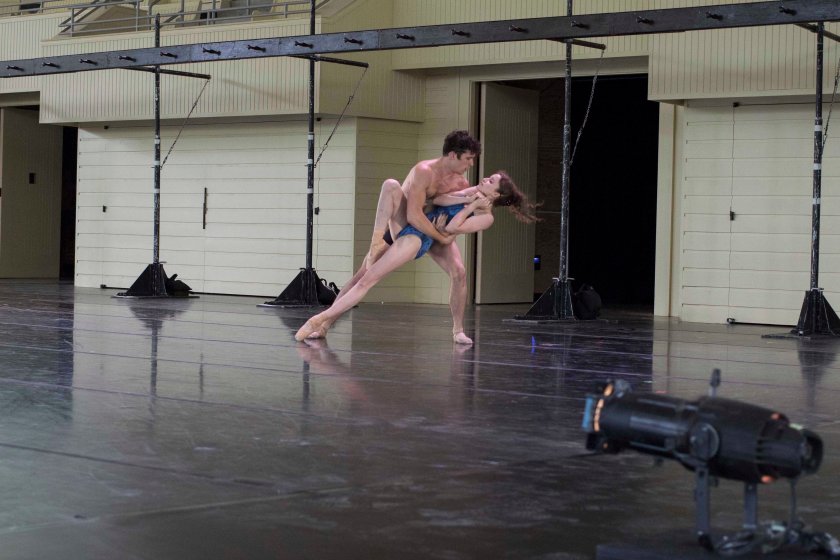 I recently took a Master Photography class with Martha Rial at Chautauqua Institution. The class was an inspiring motivation which concentrated on a photojournalism approach to telling a story. I did my assignment with the resident Chautauqua Summer Ballet, which is the Charlotte Ballet. Martha reviewed some of my images & suggested I shoot wider to tell more of the story & zoom with my feet. My interpretation was to work with 85,40 & 26 prime lenses. I knew the background & lighting were going to be far from pristine but I accepted that as part of photojournalism guidelines.

In Cuba I had a few hours to shoot ballet.  At The Chautauqua School of Dance I had 3 days of opportunities & everybody spoke English. However, listening to dancers learning a new work in class, their jargon was as foreign as Spanish. They rehearsed with Chautauqua Orchestra & performed a tribute to the retiring artistic director on the newly rebuilt stage/amphitheater. I had GREAT collaboration with the staff & the dancers. The “story” for my assignment evolved into an understated look at change & how the show goes on. 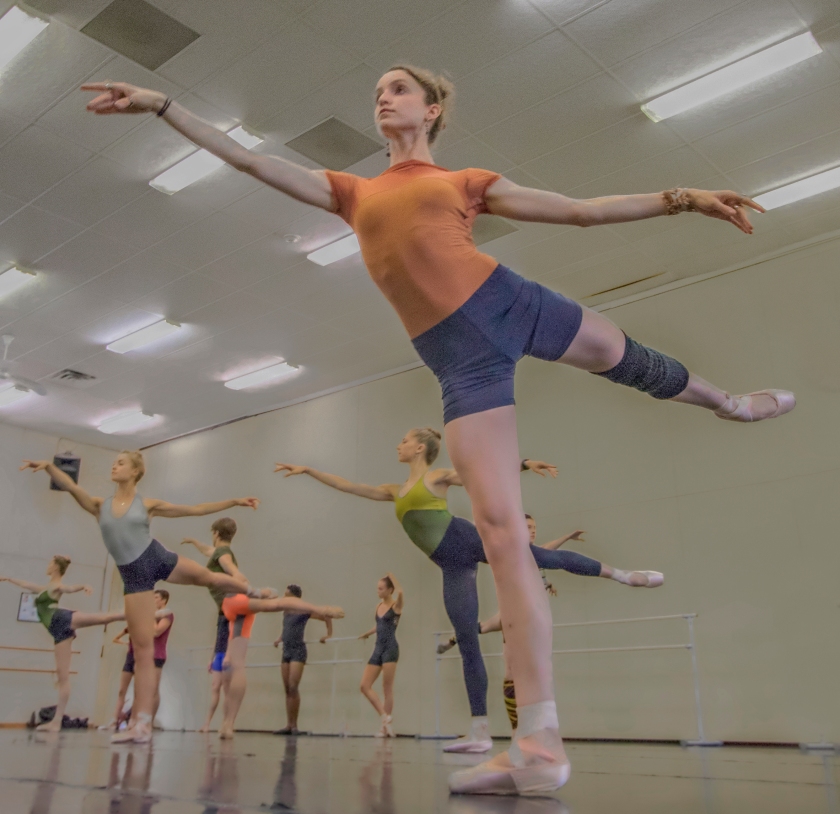 I had some satisfaction/success in Cuba with low shots & I explored that perspective even further by being closer & wider. Including the background dancers mirroring the primary subject adds another layer to the image I find absorbing. Instead of fighting a losing battle with lights I tried to be “in the moment” as Martha suggested & ignored the florescent lights. For me, the best part of the 5 day class was the interactive critique.

I was impressed with Mark Diamonds style of choreographing the routines. He spoke in a soft voice forcing quiet with students & capturing their attention. The pace the dancers were taught & coached was faster than I expected. During the condensed summer season the turn-around between performances is sometimes less than a week. Collaboration within the company was reflective of their professionalism & attempts of perfection. 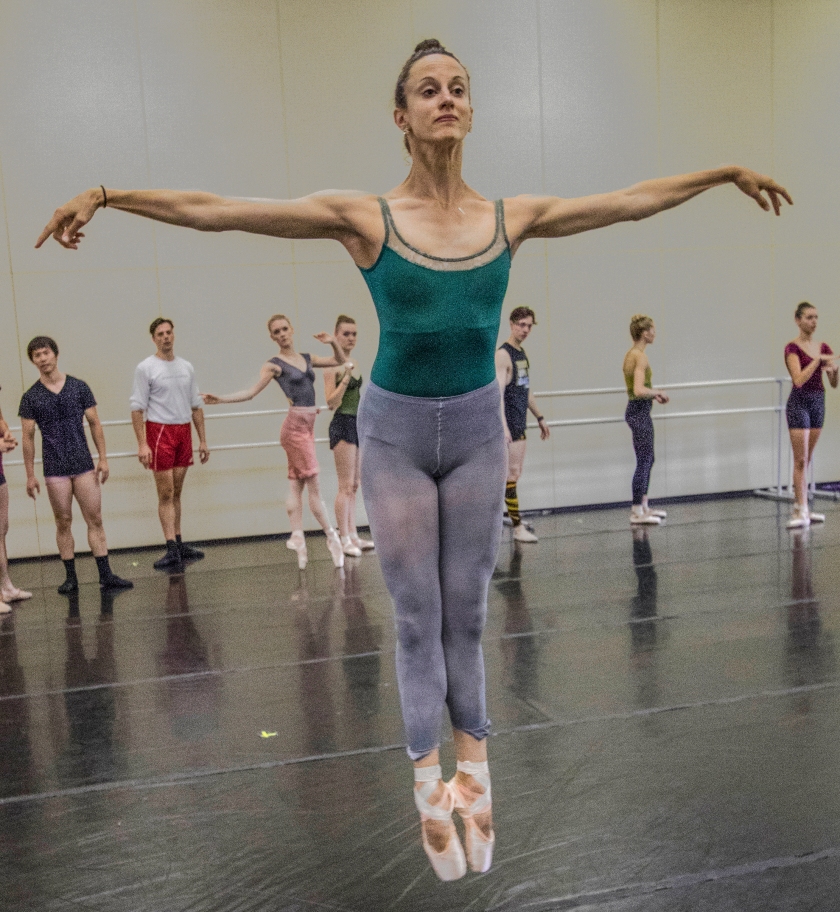 For dancers it is all about the form & the purity of the line. As a photographer I want to capture those elements but I also want lighting & background to enhance them. Since I had no control of either of those elements I needed to react to the activity as it was happening. In this shot I captured the dancer with an interesting positioning of students in the background. At least the fluorescent lamps were close in color & relatively even. 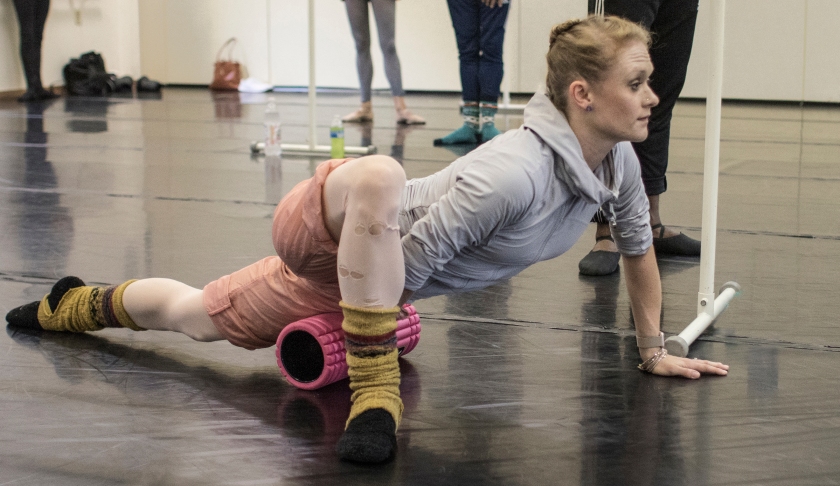 Sarah Hayes Harkins is a principle dancer in the Charlotte Ballet. She has been with the company for over 9 years.  When I saw her massaging her quads with a roller I immediately recognized the similarities to the way other athletes train & condition their muscles. Dancers have a remarkable harmony between the power & tone in their legs, shoulders back, arms & even their neck. If you think ballerinas are delicate think again. They are superbly conditioned athletes.

I’m not sure if he would agree but I think I captured the moment of his leap. I even had some better lighting as they rehearsed on the stage. For my class we were to do minimal cropping & for most of the images in my presentation I did as I was told. However, for my blog & other presentations I find cropping to emphasize the subject is a very powerful technique. During class we discussed where the line is photojournalism shouldn’t cross with respect to editing. I got a better perspective of when I would enhance an image with Photoshop. I now need to work on better use of PS tools.

Although wider shots fit the adage of showing the whole dancer, every now & then I’d see a frame that wasn’t head to toe.  I never thought just one extended arm in the frame would be a good shot until I saw this. Sarah Lapointe has her focus on the mirror as she examines her form. Capturing an expression in relationship to a pose can be dramatic. Her concentration & expression are clues to her personality. For my blog posting of this shot I stepped over the line of photojournalism by eliminating background distractions and inserting a gradient. I recognize my PS skills need improvement. However, this is closer to the style of image that motives me to shoot dancers. I spent time further exploring the added dimension of the mirror. This shot was a major improvement from the mirror shot in my last blog post from Cuba. One of the great things about photographing the dancers is that they almost never made eye contact with me. I was as close to being a fly on the wall as I have ever experienced.

The low angle adds emphasis to the height of the dancers. The symmetry of their form & line fills the frame. Given the results of shooting low & wide, if I get the opportunity to shoot more dance I will search for methods to be low on the ground that don’t aggravate my old knees.

I anticipated this classic pose during afternoon rehearsal. As they were rehearsing with a live orchestra I found myself guided by the music as to when to expect moments like this. I have become more comfortable with square framing in post-production. When I snapped the shutter I knew I would crop it into a square. I also found off angle positions to be more interesting than straight on from the center of the stage.

This is definitely not part of the dancers routine. However, this shot makes the dancers more human & adds depth to the story. Even as they leave the stage after a grueling rehearsal they are still in step. I was satisfied with the presentation I did for my class. I felt improvement in my ability to capture “the moment” of the dancers. I would highly recommend a workshop to photogs that want to expand their skills. This class was not as intensive as most & it was also far less expensive.